Joined Dec 29, 2013
·
3,651 Posts
Phil and I had really a special day during our trip to Texas recently. My aunt Jana asked if we would be able to visit her mother at an assisted living home only half an hour from my granddad in Granbury. Our schedule was open, so Jana and her sister organized our visit with the home's activities coordinator, and despite the chilly weather, every resident came out to meet Finn and Sputnik and take a ride in the goat cart! Unfortunately, all of our names got lost in translation and the advertisement printed up by the activities coordinator came out rather hilarious. 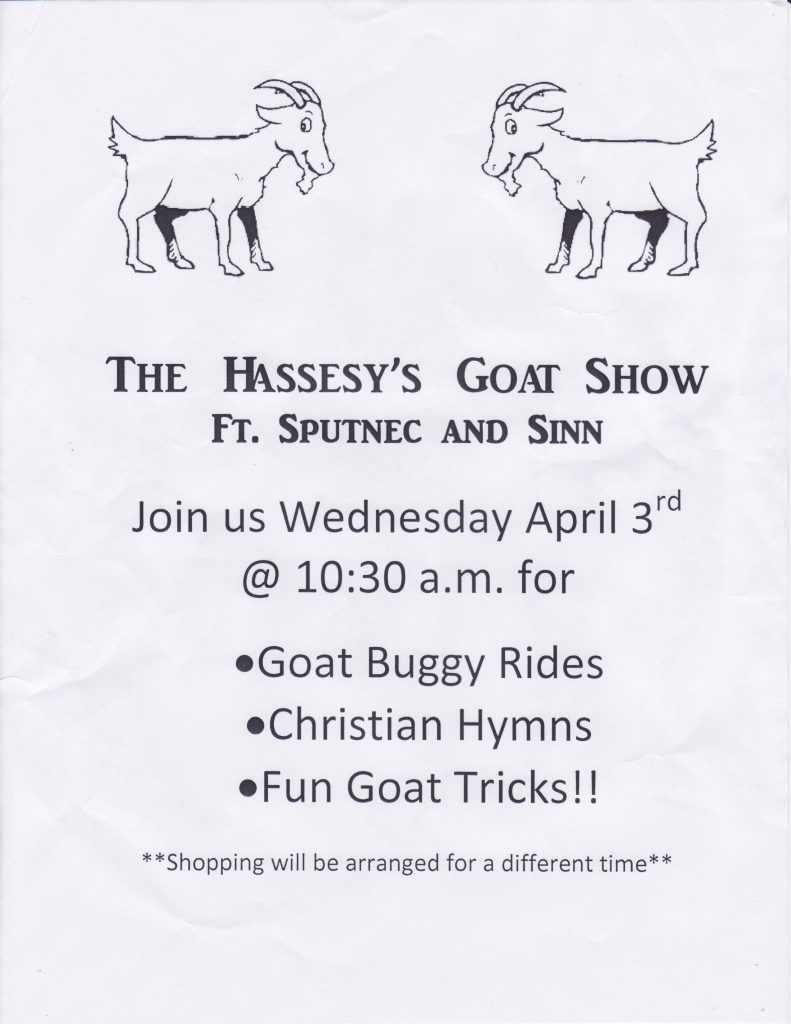 This is my aunt Jana with her mother, Peggy. Peggy had goats her whole life growing up and adored them, which was what inspired Jana to ask if we could bring Finn and Sputnik to visit her. 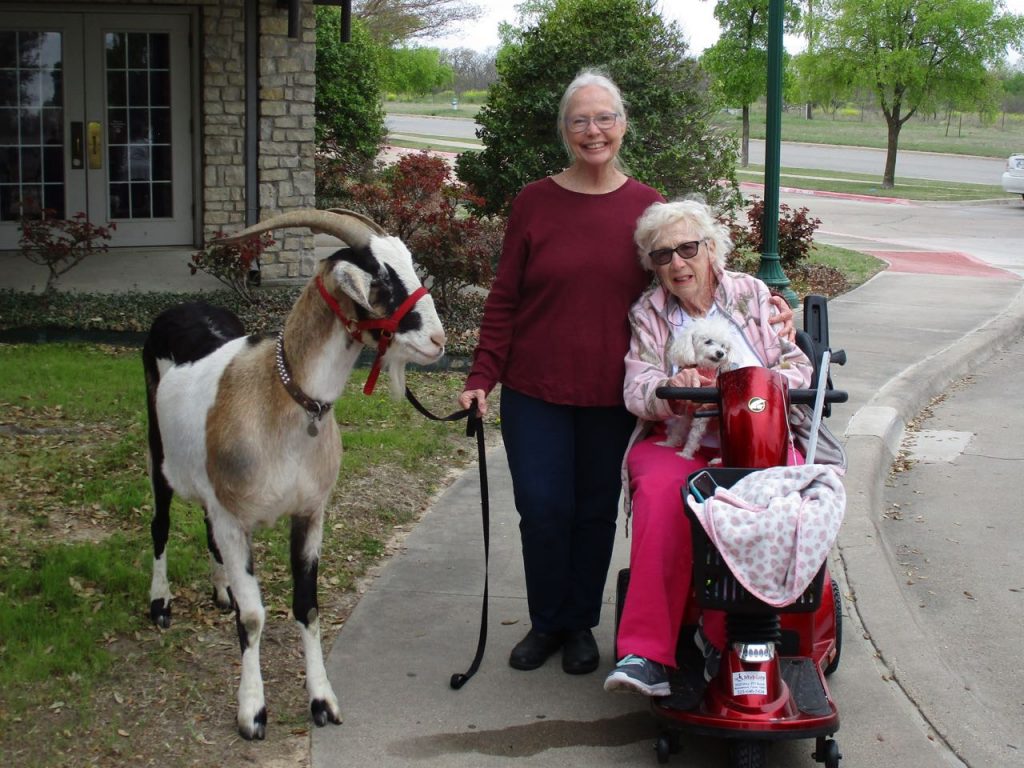 This wonderful gentleman (I think his name was Jerry) may have had the most fun of anybody. He was the first to volunteer for a ride, and he honked the horn all the way around the circle. He had a hard time talking, but he had absolutely no difficulty smiling! 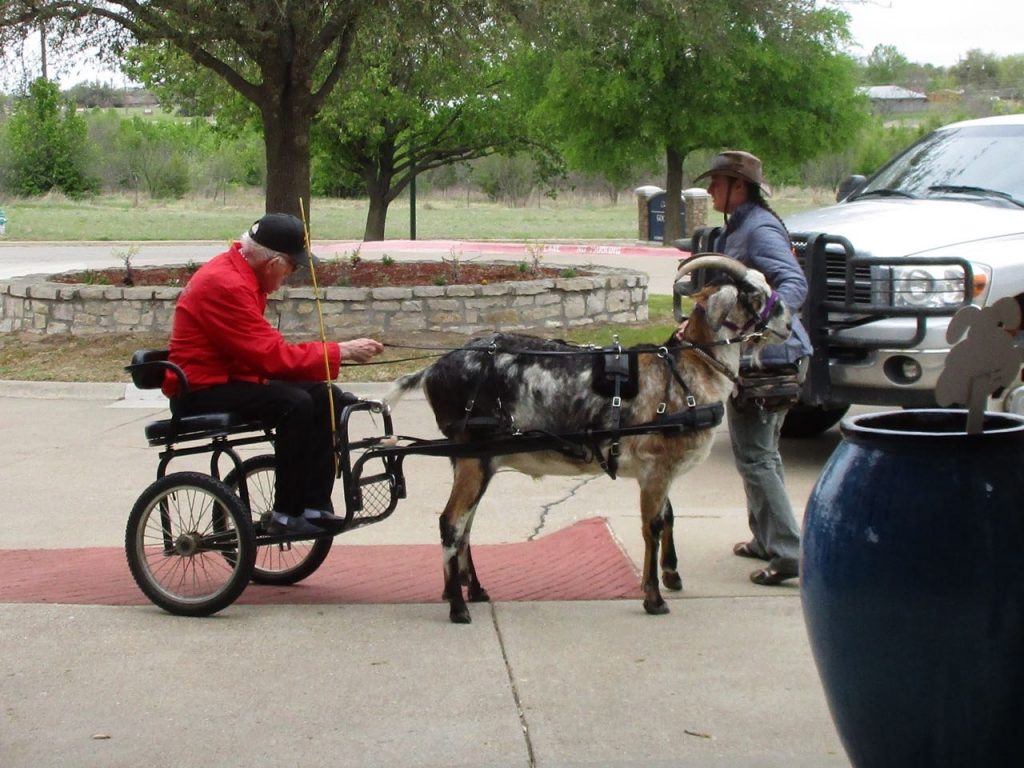 Mary was a little bit sneaky. She was one of the first to ride after Jerry, but after a few more people went, she got back in line and pretended she hadn't already ridden. Someone made the excuse that her memory was starting to fail, but I saw the crafty gleam in her eye. She knew exactly what she was doing and no one was going to tell her she'd already taken a turn! We weren't going to argue with her. 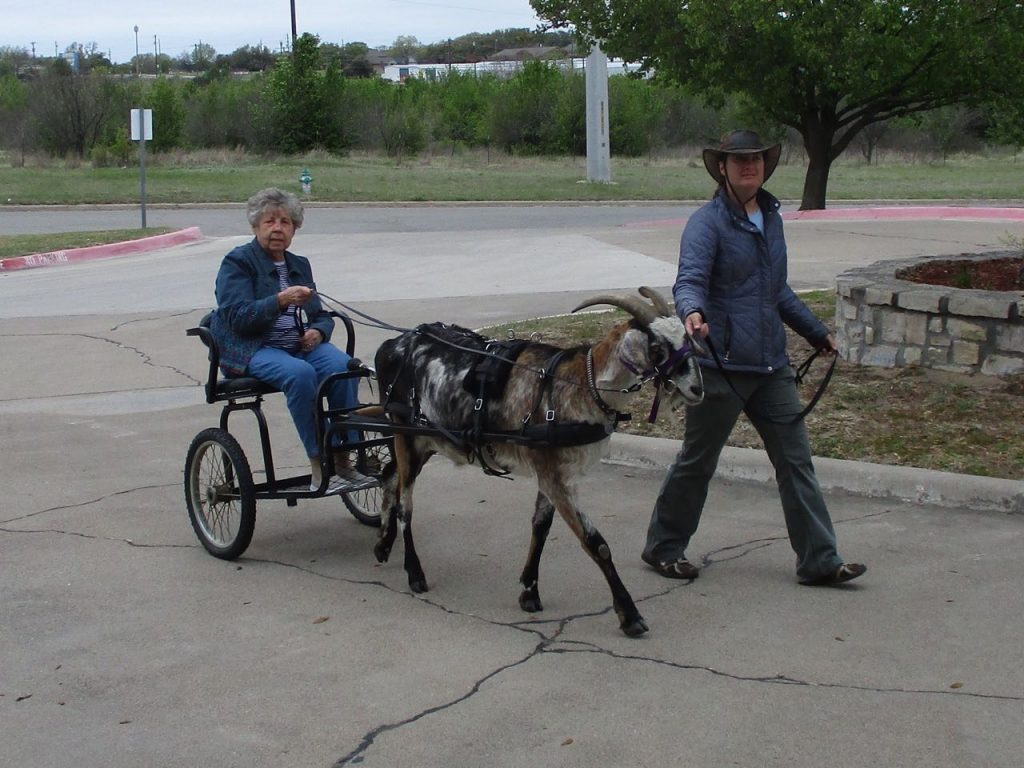 Peggy finally got her ride. She'd raised Spanish and Cashmere goats, so she had never seen any as big as Finn and Sputnik. She was thrilled to have her first ride in a goat cart! 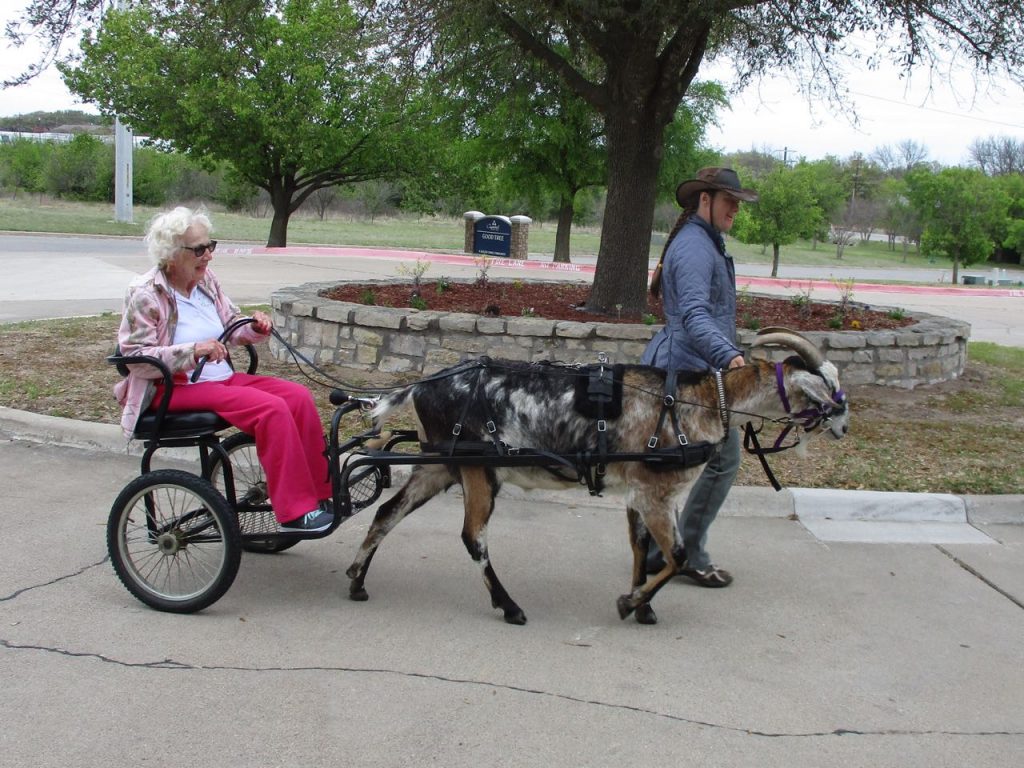 Aileen (in the blue bath robe sitting down) spent a good bit of time holding onto Finn while Phil played his fiddle. Finn was a very good boy and let everyone pet and admire him. What a wonderful day! I would do this again any time. It brought so much joy to these wonderful folks who are now mostly housebound and no longer get to be around animals. 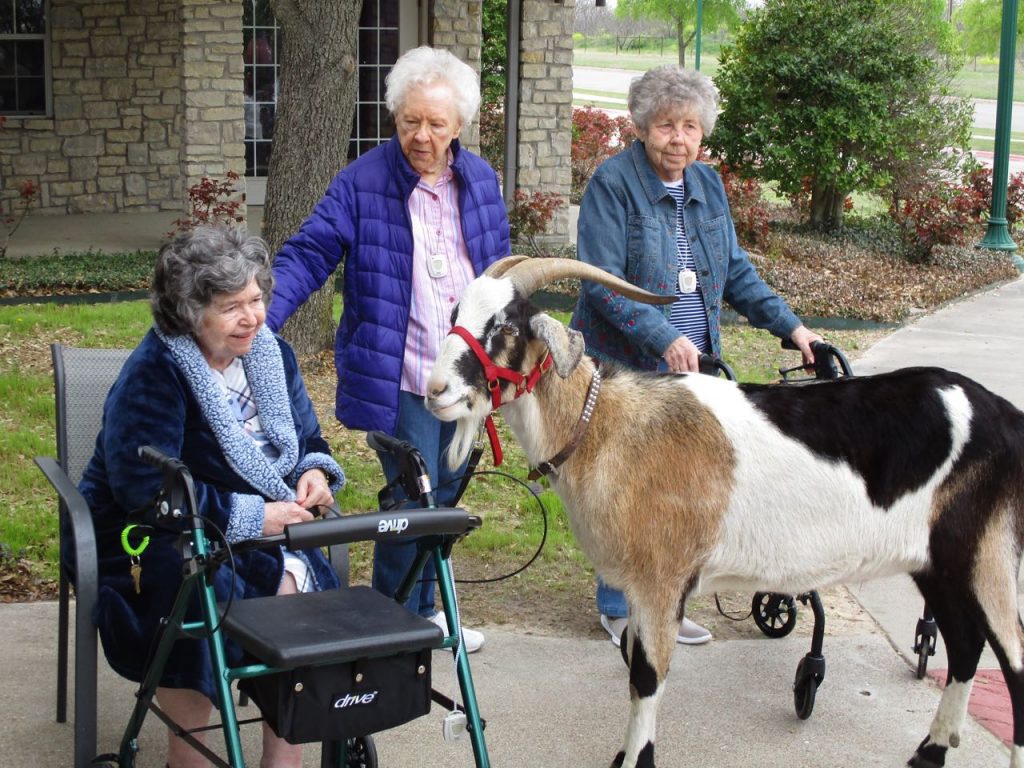 I love how Finn towers over all these people, yet he's got such a calm, gentle presence. 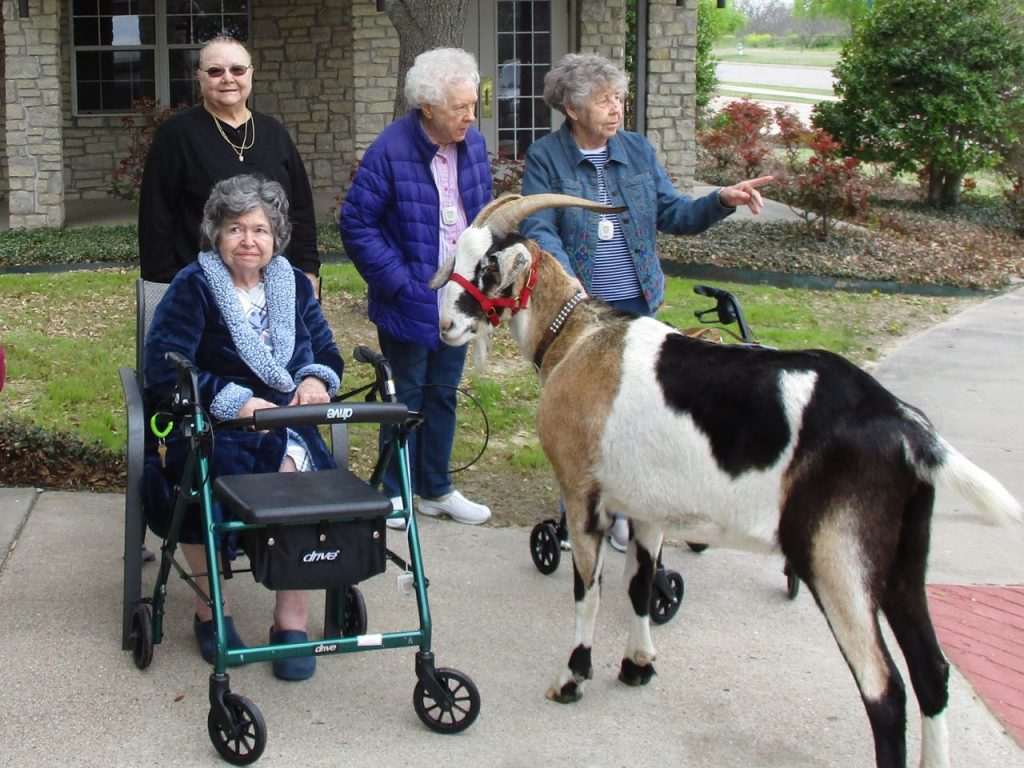 Jana had never really stared into a goat's eyes before, let alone had one who stared back. And Finn just loves gazing into people's eyes. 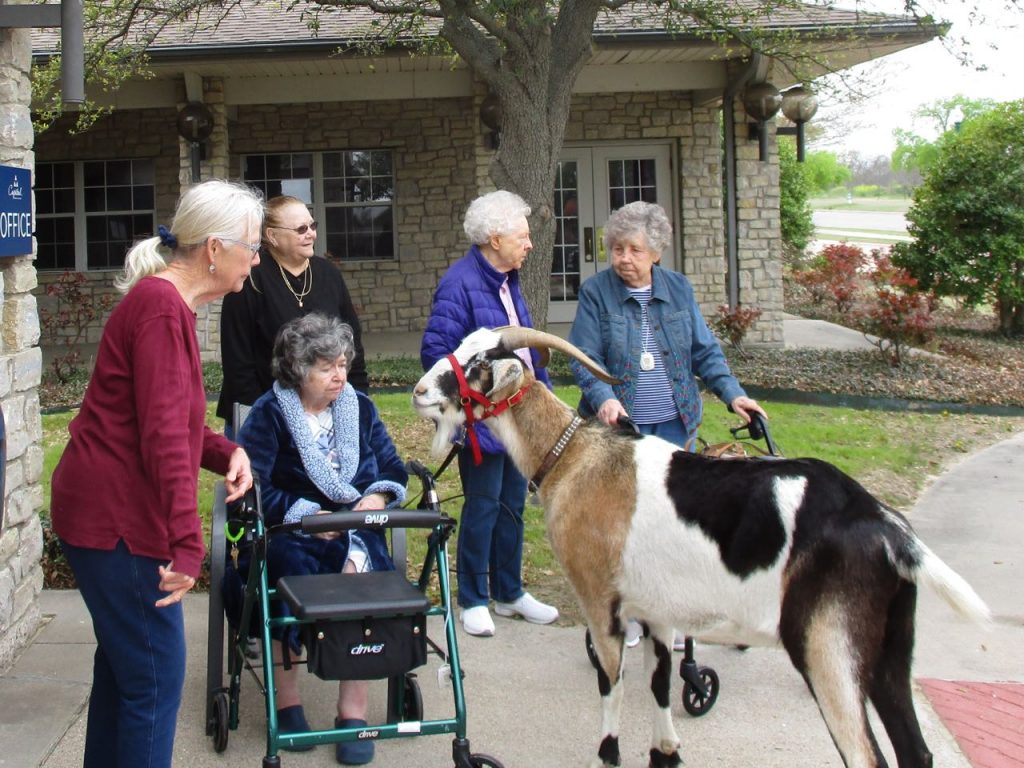 The "Christian Hymns" advertised on the flyer turned out to be "Be Thou My Vision" (which is the one hymn Phil had music for) and a lot of traditional Scottish and Irish fiddle tunes. Everyone loved the music as much as they loved visiting the goats. 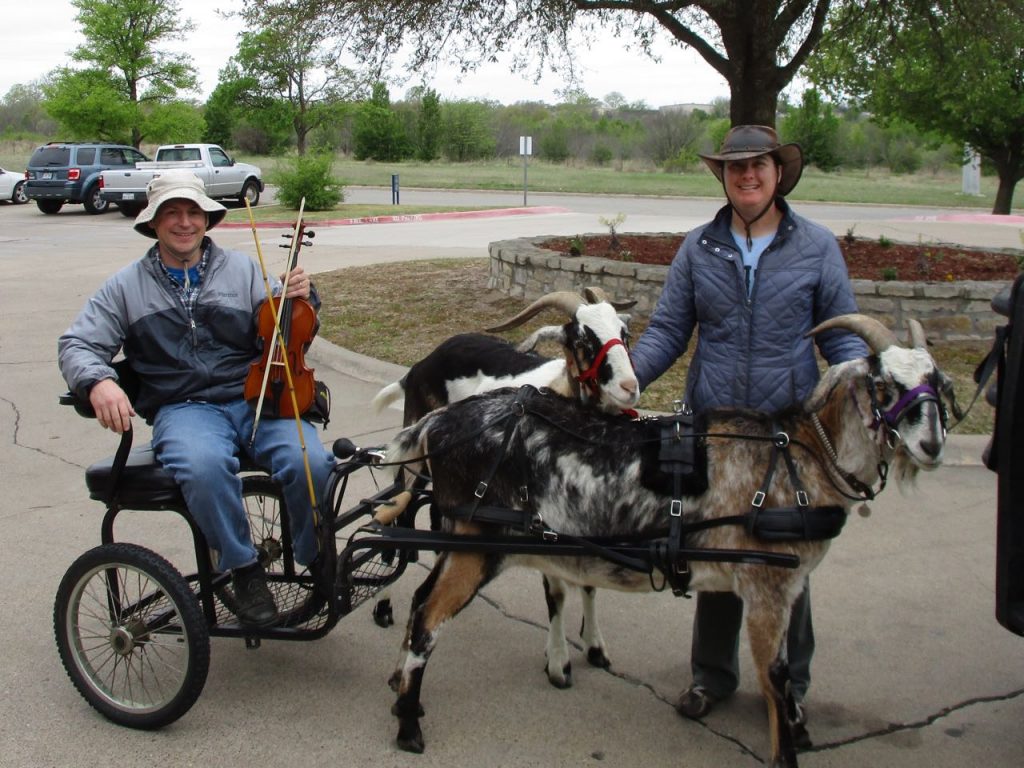 Sputnik and Finn were both such good boys through all of this! Finn was patient, calm, and kind around all those frail old people with their scary walkers, canes, and wheelchairs. It was the first time our boys had experienced something like this and they were very well-behaved. Sputnik enjoyed pulling his cart. Every resident took a ride. One woman name Sue could not speak or walk at all, but she nodded when they asked if she wanted a ride. Three nurses had to lift her from her wheelchair and into the cart. Sputnik was nervous at having so many people crowding around his cart all at once, and he wasn't sure if he should stand still when the cart bumped and rolled as Sue got situated. He jumped when the nurses hastily flung a blanket over Sue, but I calmed him with cookies, and once we got underway he was fine again. Sputnik got a big kiss afterwards for all his hard work! 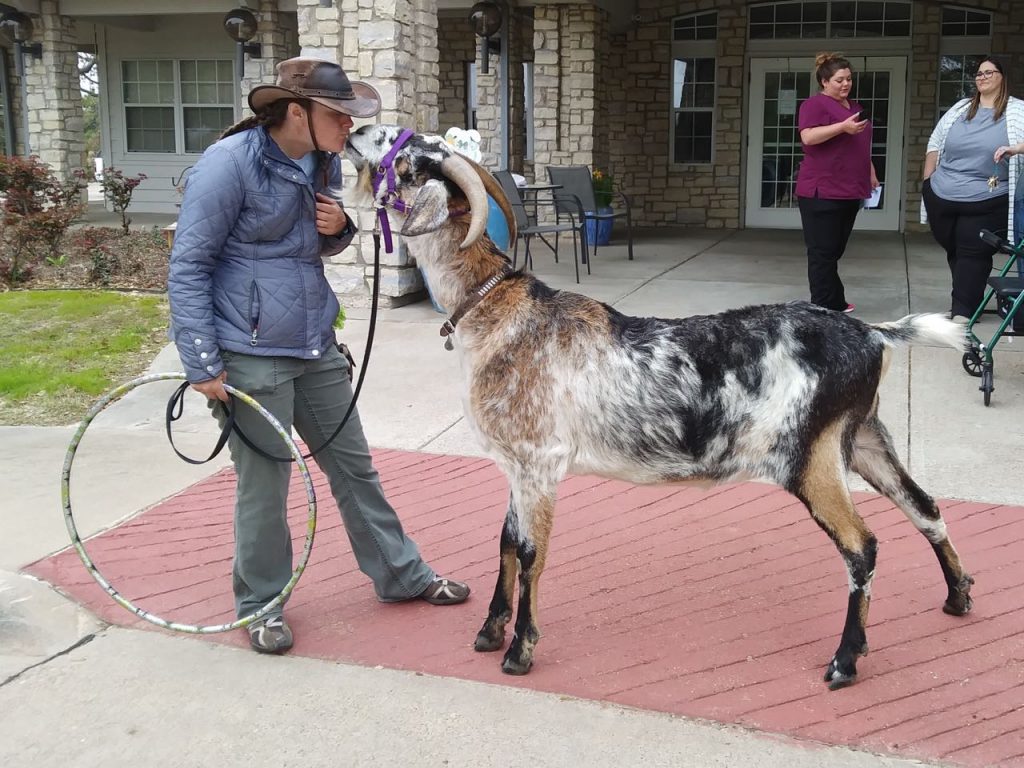 Joined Feb 18, 2018
·
4,672 Posts
THANK YOU for takin time out of your day to go do this! That looks like such a wonderful day for everyone involved. So many people put their loved ones in places and just seem to forget about them as if they were never there.... and things like this restore my faith in people. My stepmother’s mother has alzheimers and has been in a home for several years... she and her sister go only together and only about once every two weeks. I get SO stinkin mad!neither lives far from where their mother is either. I just do not understand it at all. And my stepmother does not even work... not even in she and my fathers house much. So it is not like she does not have the time. I do understand that it is hard on them that their mother has this dreaded disease and that she does not know them most of the time anymore... but come on! She is your mother ya jerks!

I always love seein pics of your beautiful boys! And! What is the hula hoop for?

Joined Jan 16, 2017
·
556 Posts
How sweet of you to do that! I'm sure it brought so much joy to the residents. I always love seeing your gorgeous boys. I just can't get over how huge they are!

Joined Aug 27, 2017
·
3,990 Posts
Great visit! The people we got our goats from do that kind of visitation regularly. You and Phil are great people, indeed!
Sinn and Mt. Sputnec:heehee: look great and none the worse for their travels. I know they are glad to be home.

Kinder Goat Breeder
Joined Aug 8, 2017
·
3,513 Posts
What a great way to spend the day! I will never get over how large and gorgeous your goats are.

In the first photo is Finn on alert due to the motor scooter or the small dog?

Sfgwife said:
I always love seein pics of your beautiful boys! And! What is the hula hoop for?
Click to expand...

We showed off a little bit after the cart rides were over and the hula hoop is one of Sputnik's tricks. Believe it or not, this big goat knows how to tuck up his legs and leap through that little hoop!

SalteyLove said:
In the first photo is Finn on alert due to the motor scooter or the small dog?
Click to expand...

A little of both. I don't know if Finn has ever seen a dog that small! (At least not up-close). Sputnik was more concerned about the scooters. Those things move weird and are unsettlingly quiet!

Joined May 4, 2018
·
585 Posts
Those two boys are really special, I love seeing updates about what they've been up to! How wonderful you were able to bring some sunshine into other people's lives.